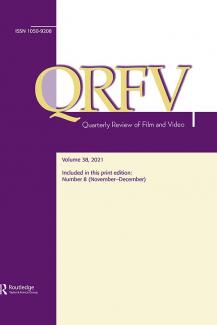 Abstract:
The beginning of Jean-Luc Godard’s essayistic practice is intrinsically linked to the use of the diptych device. Thus, a previous work is the cause of an essay film that aims to reflect on the cinematic practice carried out. This article aims to analyse the use, function, and evolution of this device in the beginning and consolidation of the Godardian essay film. While Camera-Eye (1967) offers a prefiguration of this new filmic form in relation to La Chinoise (1967), Letter to Jane (1972) results in its first realisation concerning a previous fiction, Tout va bien (1972), in order to continue the reflection on the intellectuals’ role in revolution. Thanks to the decisive arrival of video technology, essential for the essay film practice, Ici et ailleurs (1976) takes up the material of the never released film Jusqu'à la victoire to generate self-criticism in militant practice. Finally, with Scénario du film Passion (1982), Godard offers a new subsequent essay film that generates both temporalities, before and after the creation, in order to materialise an essential self-portrait of the audiovisual essayist. This series of diptych works reveals a hypertextual audiovisual thinking process that rethinks cinematic practice.